Analysis of the silent key failure in the Clavinova CLP810s piano

In order to understand the silent key failure, I went through different steps to get more information.

The two halves of the keyboard

We see below the keyboard of our CLP-810s piano. Those keys that have failed are marked with a red dot. The blue line divides the keys in two sets: A0 to F#3 and G3 to C8:

Where does this blue line come from? And why all the keys to the right to the right of that line have never failed, including the frequently used keys at the center of the keyboard, like  the octave from C4 to C5?

The blue line is defined by the two printed circuit boards that form the scanning circuitry.  When we view the keyboard from the bottom, the yellow line is in the limit of both boards:

What is different that makes only keys on the left side fail?

To answer this question, we need to be able to measure the voltages in the keyboard scanner circuitry.  A voltmeter cannot help us, because these voltages are constantly changing due to the scan mechanism. We need to use an oscilloscope, which actually displays the voltages across time.

We are interested in the equivalent circuit of each key, and want to know the voltages in A and B on each side of the diode while the corresponding key is pressed:

A BitScope Micro oscilloscope was used with the following parameters and connections:

From the voltage readings that were done, three measurements from the left side and one from the right side are included here, shown numbered in the picture below: 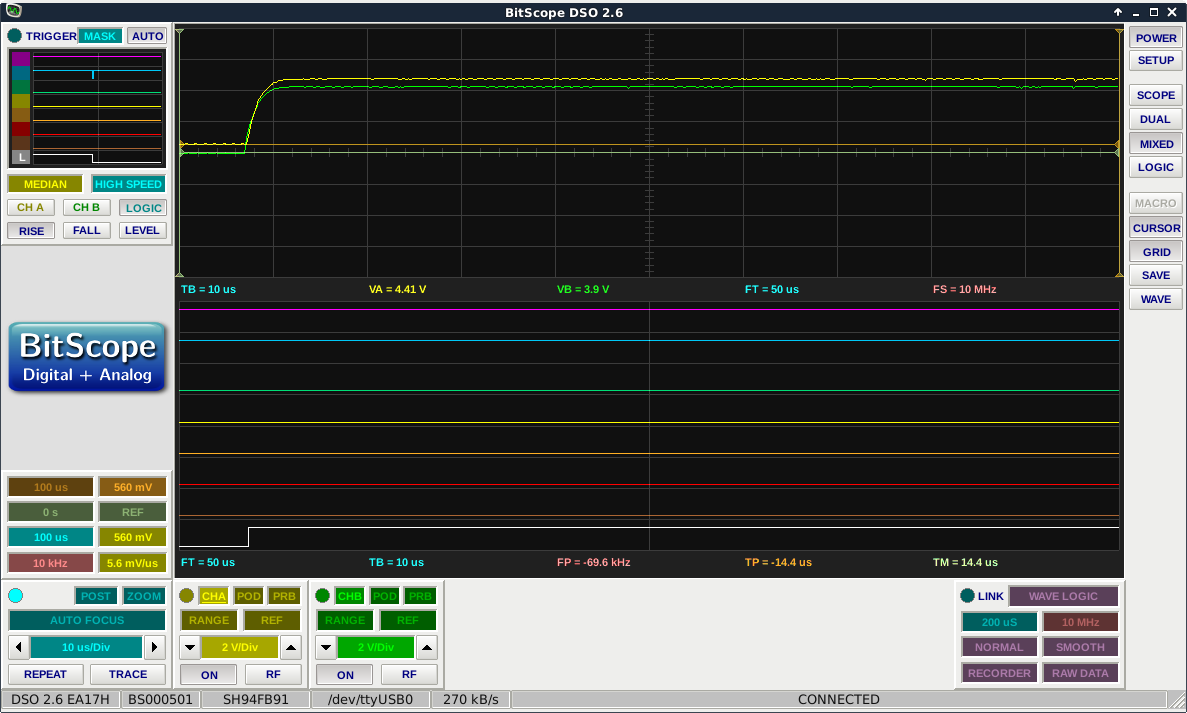 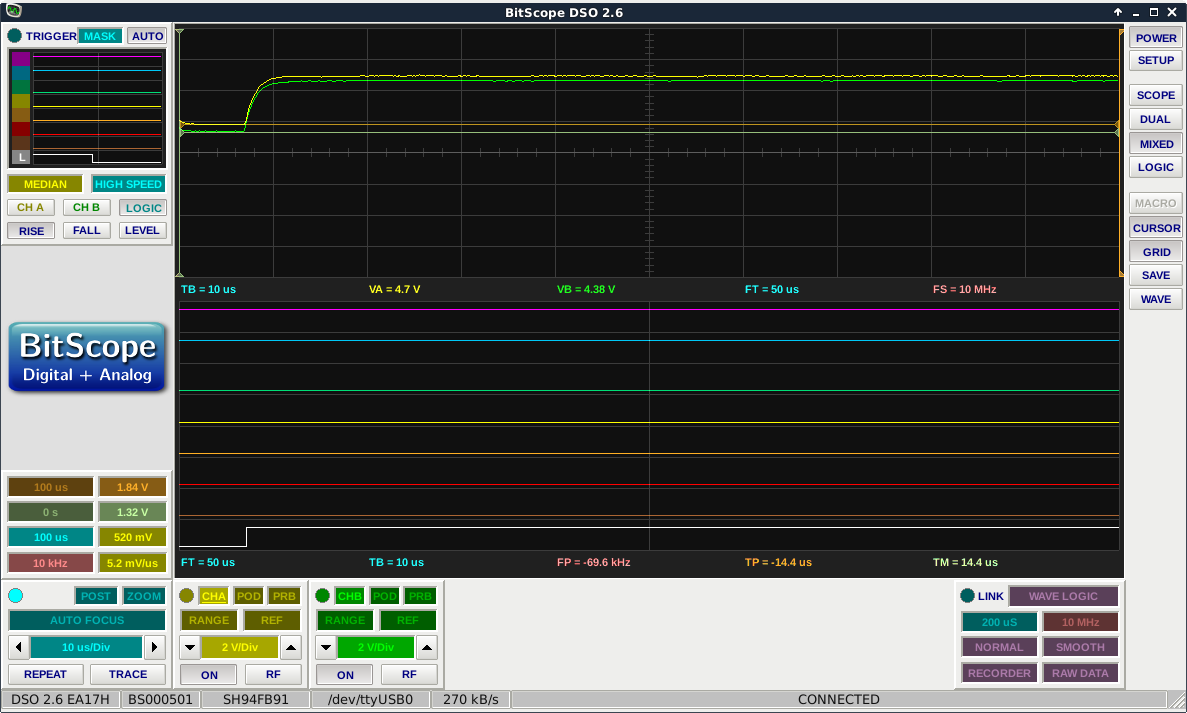 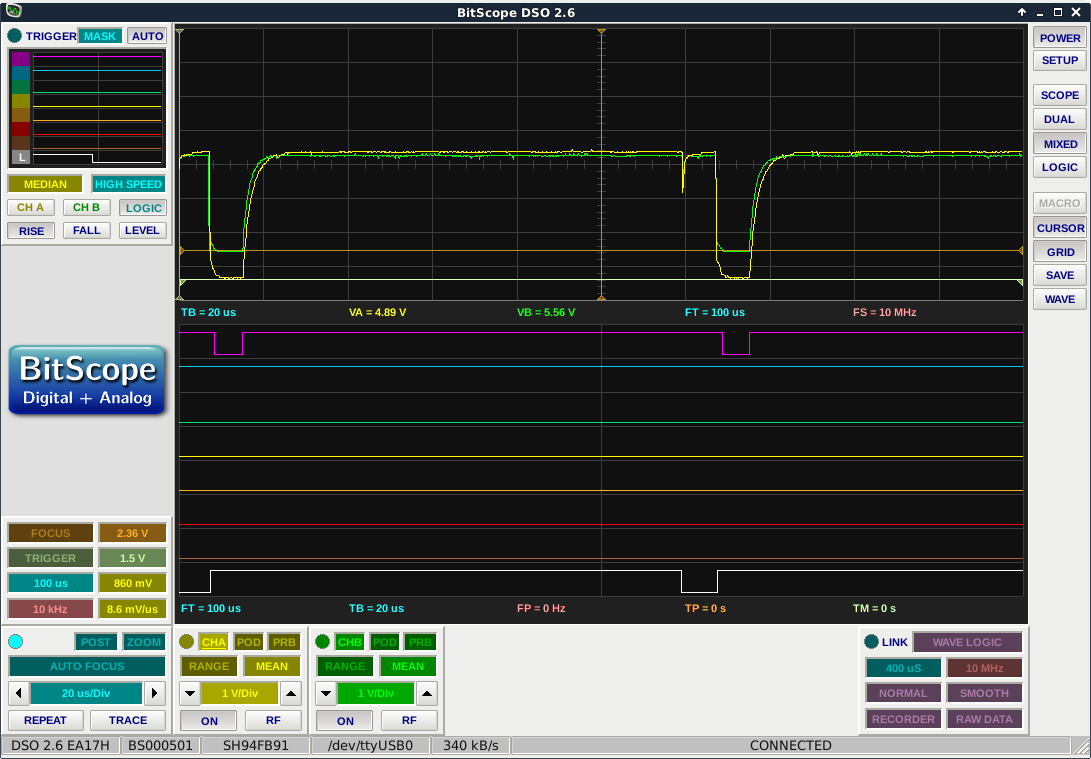 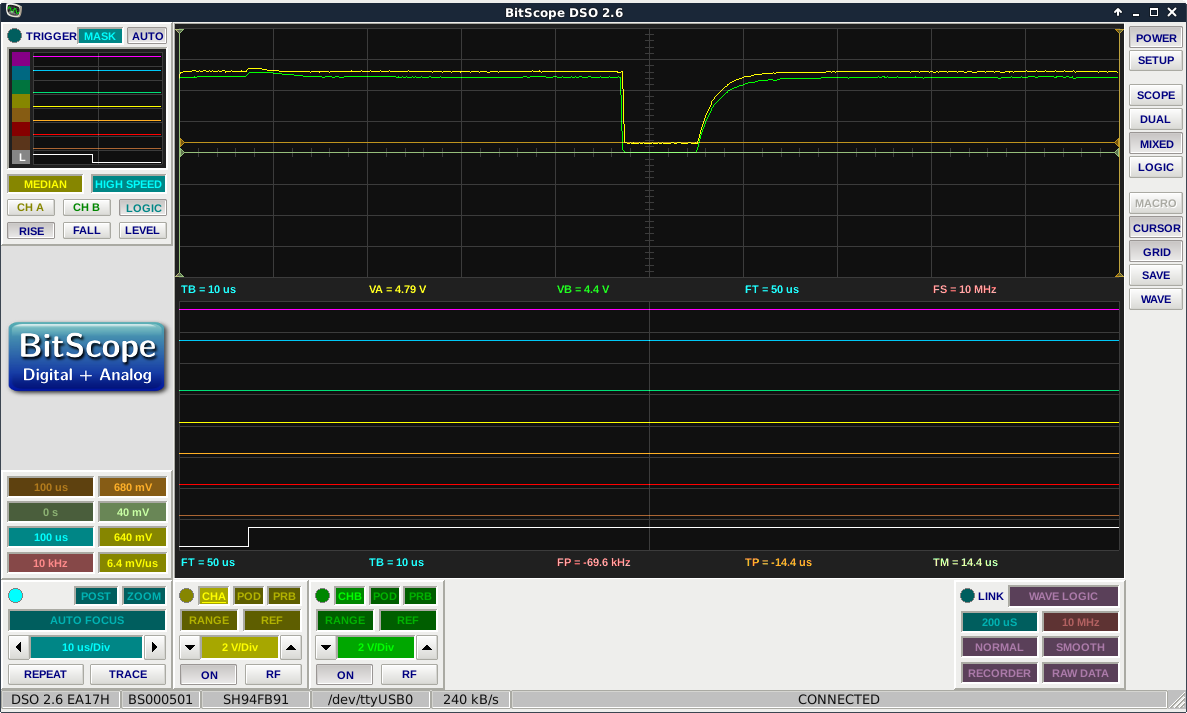 The values from above are summarized here:

The following pattern was found:

The resistance of the contact rods was measured with a multimeter and the results are in line with the calculations done above: The 6 left rods have a high resistance, the 9 right rods have low resistance.

Why do the silent keys play again if they are held pressed for about one minute?  To answer this question, we want to measure voltages at three points in time:

Two more traces were done for the E1 key, and the three traces are merged in this picture, click on it to watch the animation:

These are the readings:

Vf decreases 320mV while Vb increases 240m, with the net result that Va is decreased 80mV,enough for it be read as a logical 0 as expected.

The picture shows that frequency of use is not a determinant factor: A0 and E1 are not the most used keys but they are silent often.  Keys at the center of the keyboard are used often, but they have never failed.  High resistance in the rubber contacts is clearly the factor that produces the silent key failure.

The analysis so far has explained us what is wrong, but not why.  To answer this, we need to dig into these questions: